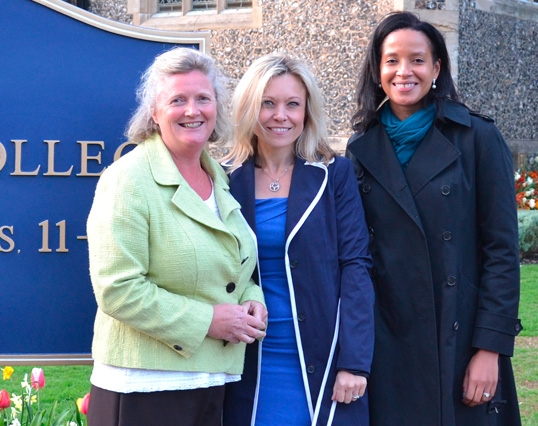 Brighton College proudly carries the name of the most successful coeducational establishment in the UK. To reveal some of their memories of the late eighties and early nineties when girls were very much in the minority, Samantha Washington (nee Fox) (Fenwick 1989-93) and Tosin Ajayi (nee Akinluyi ) (Fenwick 1990-92) were invited to share their experiences: Tosin as a sixth former and Sam as a junior girl. It was a challenge at times, but one which they embraced, and they have been extremely successful in their careers and lives.

Sam Washington was one of the first girl boarders in the Lower School. At the time, there were only three female boarders in the Lower Fifth. They lived together in a dorm next door to Miss Cody, who would sometimes sit outside the door after lights out to make sure they had stopped nattering. A William Stewart scholar, Sam went on to St Edmund Hall, Oxford to read PPE. She has worked in the City as a management consultant and then a banker, and is now a newscaster for Sky News. She was a most engaging speaker; she spoke with honesty about obstacles faced by her in the professions due to gender discrimination, but also encouraged us to be flexible in our thinking about careers, not allowing complacency to slip in, but to constantly be looking for new challenges. Tosin Ajayi had arrived from Nigeria and recounted a humorous anecdote of her first time in an English boarding school, along with the value of the little things – even netball! She inspired us not to be satisfied with anything but our best – and that our best was good enough. Her studies cross borders, with a BSc in Economics from the London School of Economics, an MA in Development Economics from Sussex University and an MBA in Finance and Economics from Columbia Business School in New York. Today she is a leading Managing Director (Commodities) of Morgan and Stanley where she leads the global team.

We were encouraged by their excellent presentations. Thank you to Mrs Murphy for organising this historical, as well as informative, event.