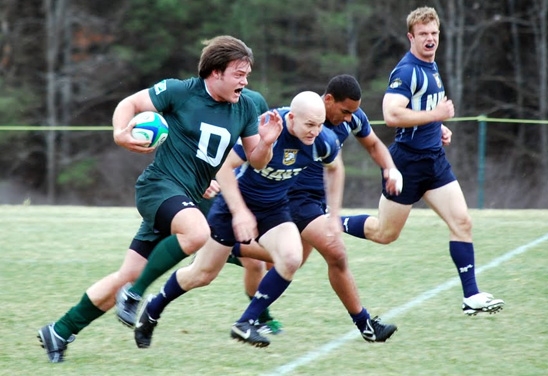 With preparations underway for the World Cup in New Zealand this year, it is with an inflated ego and a great deal of national pride that I humbly submit that we have a new contender this year: The United States of America. That's right: the Eagles will go all the way this year, and no one will see it coming.

OK, perhaps USA Rugby is not quite ready to take on the All Blacks on their home turf this year. But I would like to point out that rugby union is currently the fastest growing sport in the United States, and every year the U.S. gets one step closer to becoming a serious contender. Most players get their first introduction to rugby at university, where it originally served as a social club, but increasing numbers of prep schools are starting programs and more players arriving every year at university with some rugby experience under their belt. Once they graduate, serious rugby players from the U.S. often go on to play overseas, whether in the UK or somewhere down south. Perhaps the most exciting development right now in the U.S. is the growth of 7's rugby, which has had the most success at recruiting athletes away from American football with promises of Olympic glory in 2012.

When I arrived at Dartmouth College (an Ivy League University in Hanover, New Hampshire) I was one of the few students who had any rugby experience. After spending a gap year at Brighton and playing under the tutelage of the likes of Mr. Buoy and my classmates Ryan Manyika (S. 2002-07), Tom Turner (S. 2002-07) and Jake Scanlon (D. 2003-08), I had a head start which translated into a successful rugby career. I've loved playing the sport for my university's team ever since, and have even gone on to earn a few honors, such as selection for one domestic magazine's Collegiate All-American award.

Rugby in America is at a very exciting tipping point. This year marked the first year of the College Premier Division, the sport's first regional super league between universities all over the country. The championship final for this league grew a crowd of over 10,000, which may sound like a small gathering of friends in terms of English rugby but for the U.S. marks a significant milestone. I was able to find a great deal of success playing for Dartmouth in the CPD. Which brings me to my next point: if I can do it, just think of what English rugby athletes could do? To that end, I wanted to extend an invitation to any and all students thinking of pursuing university in the United States to contact me, particularly if they would like to learn about playing rugby in the U.S. Additionally, if any Old Brightonian ruggers are headed Stateside for work, graduate study or extended travel, let me know and I'd be happy to help get you settled in with a local club.

It's the least I can do in return for the excellent preparation I received at Brighton.