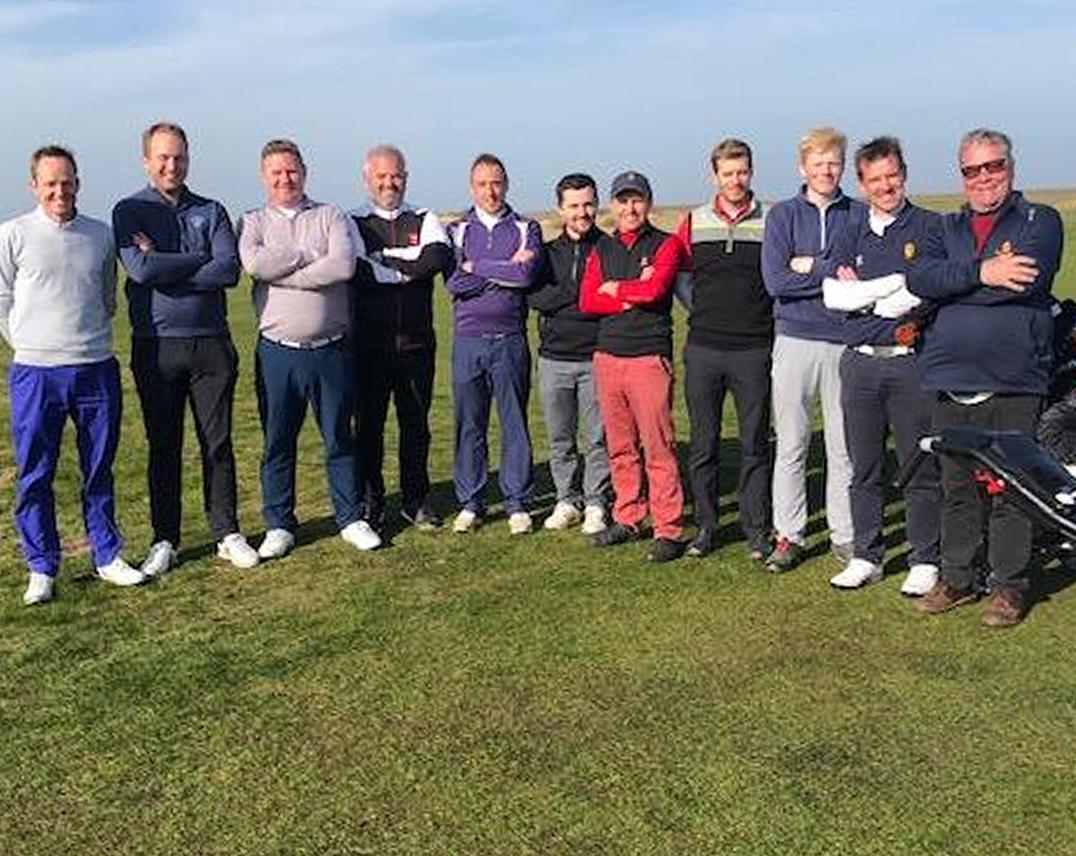 The Old Brightonian Golf Society played in the Halford Hewitt in April.

This is a Scratch Foursomes event comprising 64 teams of 10 players. This year we were drawn at Royal Cinque Ports at Deal. We managed to muster our strongest and definitely youngest team, with a handicap range of 1-5. We had a relatively favourable draw against Stowe so confidence was high.

Despite the miserable winter, weather conditions for our first practice round at Rye were good and some scintillating golf was on offer on one of the best tracks in Sussex.

Most seemed in good form and the captain (Gates) was beginning to feel slightly uneasy about selection. A decent claret at lunch seemed to calm the nerves and provide the necessary clarity of thought. So it was that we moved on to Deal for the main event, the final practice round on Wednesday with an air of optimism.

Wednesday dawned bright but with a 40mph wind, making the back 9 incredibly challenging. The great Jack Nicklaus has described these holes as the toughest finishing holes in golf. In to a 40 mph wind, he was not wrong. Some of the younger brethren suggested just playing the front 9 and then retiring to Royal St Georges for lunch. Against his better judgement, the Captain rallied the troops and we pressed on in to the teeth of the gale.

No harm done and no swings wrecked so all was well. We dined well in Deal that night and the batting order was announced:

Again the weather was great and we breakfasted well. Our tee off time was 3.20 so some went to Princes to play 9 while the captain returned to bed for some well earned rest.

The matches started well with Brighton up and 3 and all square in the other 2 at the turn. As can so often happen in foursomes things changed quickly and by the end, the matches were tied at two apiece with Spencer and Cloy and Sweet and Budd winning their games and Carter and Hunt and Ainsworth and Roberts narrowly losing their matches at the 17th. This left Gates and Long on the course all square playing the 18th. Long hit a beauty down the middle of the fairway, before Gates knocked the second close to the green. Stowe were in difficulty but managed to hole a 15 foot putt to halve the match.

So it was back down the first extra hole. Gates smacked one down the middle and then rather fortuitously, Stowe hit theirs out of bounds. Never has the sound of golf ball on concrete sounded so sweet to Brighton ears. Long laid up short of the burn before Gates chipped up to 5 feet, forcing the concession from Stowe and meaning Brighton had won a first round match at the Hewitt for the first time for 24 years. One of the Stowe supporters was heard to say: “Where does that leave Stowe golf now?” which is a measure of the importance of the win.

A significant amount of champagne was imbibed to mark this truly memorable occasion. And we even had the satisfaction of joining Hurst in the pub to celebrate our victory.

Cranleigh followed the next day, and although the score line was 4.5-0.5 in their favour, every match went to the 17th or 18th, it was very close.

In summary then, a great Hewitt, and a real sense that we are continuing the progress of recent years. With two good young players in Carter and Cloy and potentially more to follow from the next crop of leavers things are looking very rosy indeed for the future.

If you would like to get in touch with the Golf society you can email Julian (Du. 1984-87) at This email address is being protected from spambots. You need JavaScript enabled to view it..