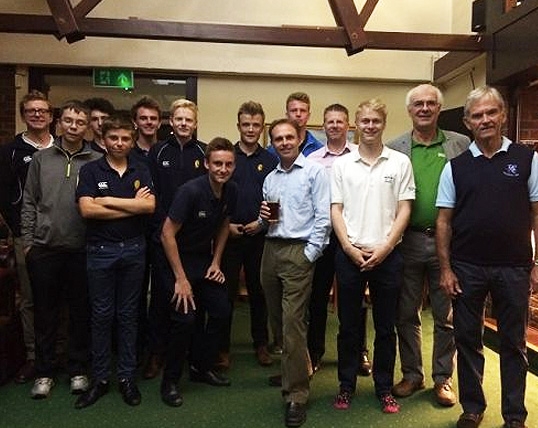 Last Thursday, 8th September, the College travelled to The Dyke Golf Club for the annual match against the Old Brightonians. The sun shone, but a fierce wind was blasting across the downs, making conditions tricky for all parties.

The first pairing of Bailey Carter and Joe Waters got an early lead against the OB pair of Will Wright and Robert Weir, with Joe making some pars and birdies. After 9 holes the team were 4 up and by the 14th hole the match had ended 6 and 4.

In the second match off, Will Longley and Tom Chalmers took on the OB pairing of Jules Hunt (Du. 1984-87) and James Bell (Ry. 1982-87). In a fairly one sided encounter the old boys got one up early after eagling the first. They remained one up after a succession of halved holes until they capitalised on the par 3 6th and went 2 up. Despite being down from very early in the game Longley and Chalmers continually reduced the deficit, however ultimately they were outplayed by a stronger pairing and ended up losing the match 3&2. It was a hard fought match in good weather, though windy conditions which proved difficult. A good round was had by all.

Jack Morley and Jack Montfort Bebb paired up once again, for the third match out, to defend their unbeaten record for the College. Up against Chris Pett (Ha. 1962-67) and Tom Rollinson (Al. 2008-13) the pupils got off to a good start with Jack Morley shooting 1 under par through 3 holes, and holding on to remain there at the turn. Jack Montfort Bebb then took over the scoring, and kept the boys ahead until a late charge from the OBs, reversing the scores so that the boys were 1 down on the 18th tee, needing to win the hole to tie the match. A superb putt under pressure from 12 feet by Jack Montfort Bebb achieved the desired conclusion to a really good match.

Many thanks to Jules Hunt for his supber organisation.  If you are interested in playing golf with the Old Brightonians you can contact Jules at This email address is being protected from spambots. You need JavaScript enabled to view it..