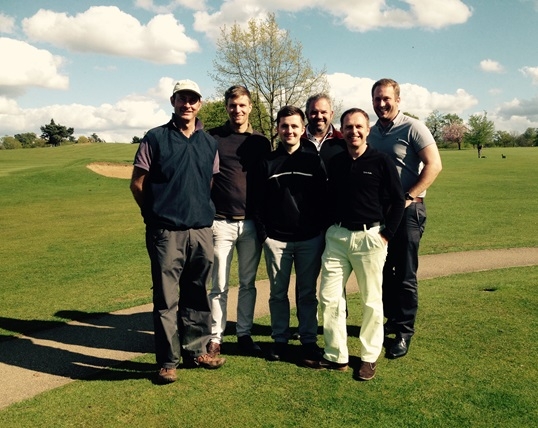 OB's secure a place at the Grafton Morrish Finals

After last year’s chastening performance 6 OB’s set off for Knole Park ,Sevenoaks more in hope than expectation. The top 7 out of 16 schools from the South region would qualify for the Grafton Morrish Finals, to be held 24-27 September at Brancaster & Hustanton, Norfolk. The format, on a tight and windswept course was 3 scratch stableford foursomes, all scores to count.

My sole team order was to ask that the big hitting first pair of Mark Budd & Andy Sweet kindly leave their drivers in the car on account of the success they secured at the Halford Hewitt. Lacking the gravitas of our HH Skipper Geoffrey Bush, I was told that all driving ills had been cured in the intervening month, and the drivers stayed in. It was therefore concerning to see Team 1 marching back to the tee on the 7th hole having hit a drive into the Knole Park stately home. Team 2 comprised the diminutive duo of myself and Ben Roberts and, as rarely happens in golf, serene progress was made. A log jam at the 11th hole allowed an update to be taken. The Greyback’s ( ala Andy Sweet) demeanour suggested that a disaster was unfolding and his subsequent shot lent some truth to the impression. Behind us Team 3 comprising Freddie Pett and Jules Tate played the 11th from the forest and, without ever coming within 50 yards of the cut grass and making contact with 3 trees an improbable point was obtained but, once more the body language suggested that dark times were being experienced. A trip to Norfolk seemed unlikely…

The remaining contact with Team 1 was to see Andy Sweet a full hundred yards left of the fairway hacking out of the bracken and then to watch Team 3 play in to the 18th with a yellow ball ( a Pinnacle from Jules Tate’s bag we decided ) suggesting yet further contact with the forest.

Team 2 came in with 33 points but a heavy heart.

Team 1, clearly used to playing to a higher level, then disclosed that they had in fact amassed a highly creditable 28 points. A quick review of the leaderboard showed that these were some of the highest scores posted of the day and the mood changed swiftly. So near and one game to go… the Pinnacle just about made it into the hole and it was apparent that Team 3 thought that there was little chance of qualification…the boys had scrapped however and vital points had been secured.

Not only had we qualified but we did so proudly, in third place, behind the ubiquitous Tonbridge of course! The treat is a trip to Norfolk to play on two of the finest links courses In England, plus the opportunity to stay in a Manor House Hotel with an AA Rosette restaurant – a welcome change from the Swingate Curry House we use for the Halford Hewitt!