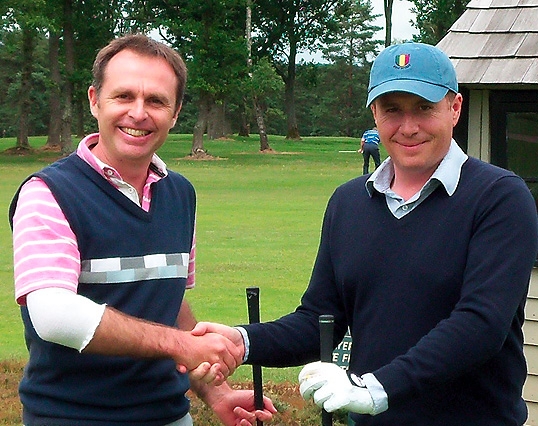 The Society took on the Brighton College Masters in the Inaugural Event staged at the West Sussex Golf Club on Sunday 10th June.

Match 1 saw Ben Roberts take on Master in Charge of Golf, Paul Sperring. A tactical master stroke saw Paul surrender the first few holes to lull Ben into a false sense of security. Paul then blind-sided Ben by putting on an impressive display to take the match 2-1.

Match 2 saw Dan Gabriele take on Julian Hunt. Dan followed Paul's strategy by losing the first few holes and bemoaning his form. This strategy found another willing victim with Dan going on to play some exemplary golf and to come through with a 3-2 victory.

Match 3 saw Gareth Roots take on Freddie Pett. Freddie was the form player for the OBs and was able to prevail in a good quality match.

Match 4 saw Richard Grice take on Ed Kittow. Reports indicated that much of the game was played from heather and perhaps it was Ed's superior strength which saw him through this close encounter.

Match 5 saw Brendan Lambe take on Chris Pett. As Mr. Lambe reached the Clubhouse with a broad smile, it was quickly apparent that he was the victor. Chris nobly remarked that Brendan was a very strong golfer for his handicap but felt that he could not be held accountable for his actions if he ever saw Brendan's putter again!

The deciding match was between Paul Harrison and Harry Klus. A close match which went down the 18th and ended with a fruitless search in the heather for Harry's approach shot handing victory to Paul.

A very enjoyable day was had by all with the Masters recording a 4-2 victory.