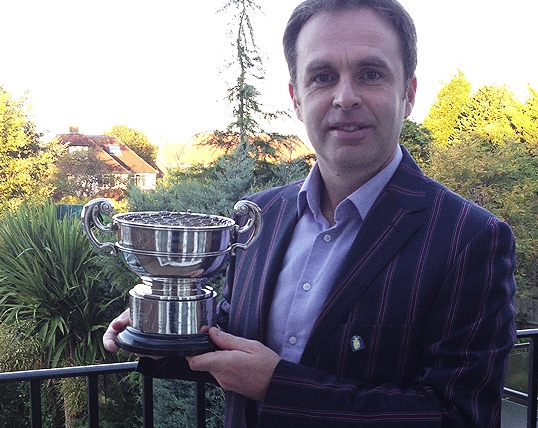 Upon arrival the OB's were greeted with a strong wind, rain and fog. Our Member, Nick Sutton's (D. 1983-88) suggestion to play off the white tees was enthusiastically taken by the post 1980 school leavers. Although the rain and fog lifted, the course took casualties as Keith Kan (B. 1953-58) pulled a calf muscle attempting to jump across a ditch and retired on the 7th and Warwick Sabey's (B. 1959-65) knee gave way, leaving him side lined for the afternoon. The biggest casualties however were felt in the scoring department as few players proved able to play to their potential – no scores to be released with this Bulletin! The upshot was that Warwick Laing (A. 1984-87 ) came 3rd, Adrian White (C. 1960-65) 2nd and the 2013 winner was Hon. Sec. Julian Hunt (D. 1984-87) whose mantel piece is suddenly bulging (see Sussex Cup Report).

Following an excellent lunch and fine wine, those still standing regrouped to play a foursomes event around the West Course. The winners were the fancied pairing of Geoffrey Bush and Adrian White.

So, that's it for 2013. Our open events were well supported and continue to grow and our scratch team made good progress this year although we succumbed in the first round of the Halford Hewitt main event, we made it through the quarter final of Plate before narrowly succumbing to the eventual winners and, we finished on a very strong note by retaining the Sussex Cup. Our team is starting to look strong on paper and we are gaining belief which bodes well for 2014.