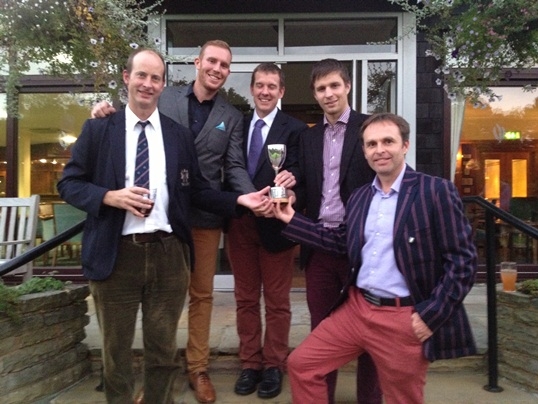 At Walton Heath on Sunday 22nd September, Brighton College once again prevailed in the annual competition between Hurst, Lancing and Eastbourne.

Michael Mudie made a welcome return to us after a period in the professional ranks. It was a pleasure to have Michael back in the fold and it was fitting that it was his putt on the practice green at Walton Heath that secured the retention of the Cup.

In the morning foursomes, Michael and Jules Tate came up against an in-form Hurst team who were under par when they succumbed 3 and 2. Second pair Roly and your Secretary were drawn against a Lancing pair which included a professional wannabe who was able to outdrive Roly by up to 80 yards. The OB's however stuck to the basics and waited for the opponents to make their mistakes which they duly did resulting in a 3 and 1 victory. At third pair were Petri Hitches and Freddie Pett who took on another Lancing pair which included a professional wannabe. An inspired performance from the OB pair resulted in a superb 3 and 2 victory. Brighton went into lunch just behind Hurst who had won all their morning matches.

Brighton College then went against form by mixing the first two pairings. Out first went the two Jules' to take on Hurst's top pair in a must win game. Having looked as if the College would prevail on the 17th, a collective loss of nerve suddenly saw the game go back to level on the 18th. Fortunately the OB pair regrouped and played a solid final hole to win the match as Hurst visited heather and bunker. Out second for Brighton were the pair of Roly and Michael who proceeded to give a golfing exhibition against an Eastbourne pair winning handsomely 5 and 3. Petri and Freddie were unable to produce their morning magic and were beaten by an Eastbourne pair.

Brighton were now equal with Hurst on points and the result hinged on the final match against Hurst and Lancing. After an anxious wait it was confirmed that Lancing had done Brighton a favour by beating the Hurst pair which meant that the Cup would now be decided on a sudden death putt-off.

Brighton had little hesitation in nominating Michael as their man and after three tight holes which were halved, Hurst missed a four foot putt leaving Michael with a three footer for victory. With no display of nerves Michael slammed in the putt to seal the win.

This email address is being protected from spambots. You need JavaScript enabled to view it.