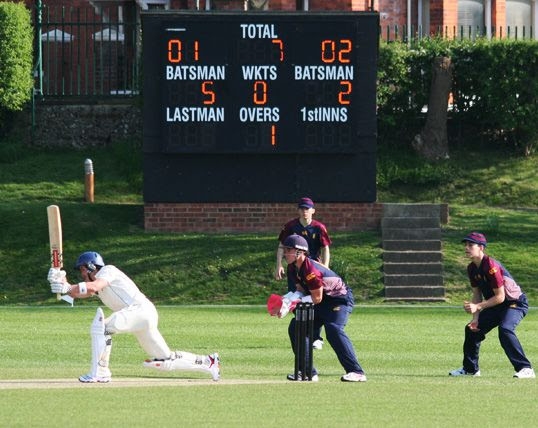 The annual cricket game between the college and the Old Brightonians was played at the Home Ground on a sunny afternoon 23 June.

The College won the toss and inserted the OB's in this 40 over game. Openers Ed Coombs & Elliott Cloy (Al. 2002-05) put on a 54 partnership. The College bowlers in particular Tom Anson (Al. U6th) bowled a tight line at the top order and restricted the OBA to 70 in the first 20 overs by which time both openers were back in the pavilion. Hugh Richards (Ha. 2007-12) fresh from a fine hundred on the Home Ground last week for the MCC v. College looked to dominate the College attack once more, but some fine spin bowling by Will Longley (Ha. U5th) (3-18) pegged the middle order back. The OBA managed to post a decent score thanks to Jamie Thornely (Ry. 2007-12) (43) and last years leavers Ned Wright and Ed Catt. The OBA finished on 174.

The College got off to a flyer and posted 63-1 in the first 10 overs. However with the introduction of spin again the game changed. Josh Hayward (Ha. 2012-14) (2-21) and Julian Hunt (Du. 1984-87) (4-16) pegged the College back and reduced them to 106-7 by the 30th over. The OBA were unable push home the advantage and some fine striking by Sean Richardson (Ry. U6th) (41) left the College last wicket pair of Lewis Edwards (Du. U6th) and Will Longley to get the last 20 runs. A very exciting last half hour of the game saw the OBA surrounding the bat with the tail enders trying to manage the last few runs. The umpires had many shouts as the College edged closer but finally in the last over the College edged home.

A fantastic game ended with both teams enjoying the late afternoon sun with a BBQ and drinks in the Sammy Woods Pavilion.

My thanks to the College and Mike Smethurst for hosting us once again and wish the College the best for the end of season BOWS Festival this year at Oakham School.