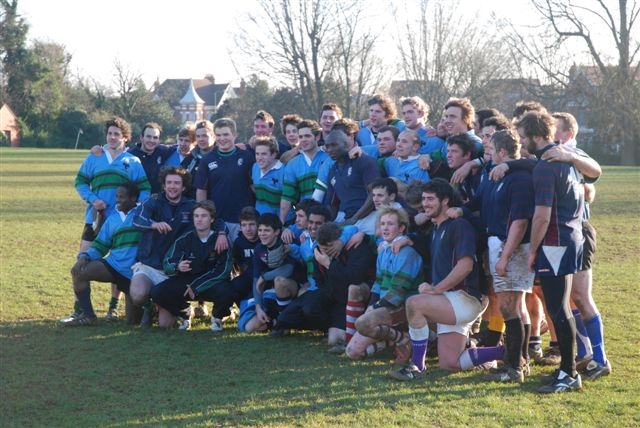 With Christmas hangovers and steaming breath whipped away by the icy winds the OB's arrived at Hove RFC for this years instalment of the Padwin Cup. With honours even from last year there was a real expectancy in the air, round two if you will, a second chance to establish dominance. Icy heads and fiery hearts took the field on the 27th to do battle for just a few inches of silver but a whole institution's respect. It is a shame that in recent years Hurst and Brighton College have discontinued sporting fixtures, but both Old Boy Club sides were adamant whatever the stakes we would fight to keep the long standing rivalry going.

Unfortunately for the few hundred spectators that braved the cold to watch the game, it was a tad one sided as many of the Stockholm 'Dream Team' touring side returned to swell the ranks of the OB's. The starting pack was indeed sizable, hooker Alex Yeo (H. 1998-03) at 6ft 2 and 16st was incredibly among the lightest on display such was the sheer bulk of the engine room, made even more impressive by the fact at just 24, he was also the oldest! Props Timmy Walford (a quite brilliant scrummager) and Tim Mason were rugged and powerful, and they admirably backed up by the solid Alex 'Dell' Keighley (L. 2002-07) who is turning into a very promising ball carrier. Whilst in Alex Yeo (H. 1998-03) the OB's possess a ball playing hooker who is just as capable in the back row as he is in the front three, a most dependable and brave rugby player with an impressive work ethic and excellent darts in the lineout. In the second row we had myself and fellow work horse Alex Shaw (R. 2002-05) who is a master of abrasive tactics and exceptional under a high ball. However in the back row we have a phenomenal trio developing, England Students No.8 Ben Maidment (R. 2002-04), a hulking 6ft 4 19 st prize bull, bristling with muscle and determination. Openside flanker Harvey Strudwick (H. 2006-08) a most talented 'mad dog' style flanker, his speed and ferocity around the tackle area is an invaluable asset to any team, I feel Harvey will follow in Ben's path and we will certainly see more from him on a representative level. And finally Andy Hodgkins (R. 2002-04), he could play in any one of the back 5 scrum positions (in fact I think he did on the day) and did so with such natural talent it is difficult to know where to play him. What we all know about Andy is his immense fitness, power, pace and natural game awareness coupled with his sizeable stature and build make him stand out as one of Brighton College's best ever players, he is honestly quite exhausting to watch sometimes, a quite brilliant player and a bone crunching tackler, Hurst will have hated playing against him.

The backs with such names as Tom Aiken (A. 2003-08), Adam Phillips (H. 1998-03), Tom Hird (A. 2001-06) and Will Harris (S. 2000-05) from scrum half to outside centre would surely frighten any National 3 back line, whilst ultra speed machines in James Baldwin (S. 1999-01), Tom Howell (A. 2000-02) and Dipo Osho made the out wide options look mouth watering. In Tom Hayward (D. 2002-06), Will Murrills (R. 2003-05) and Josh Jones (D. 2006-08) we have three players capable of playing anywhere on the field all possessing excellent hands and pace. The new look Tom Hayward seems to be in excellent shape and his try in the 2nd third demonstrated his undoubted natural acceleration. I have waited until now to mention Rupert Baldwin (S. 2001-06) as he was meant to be employed as a flanker on the day, but whenever we saw Rupert, he seemed to be out in the backs, he does have excellent hands which he demonstrated throughout the day and isn't slow for a forward, indeed, he expertly set up Tom Hayward for his try. However, I think we all might have liked to have seen Rupert hit a ruck at some point. Perhaps he would prefer an outing at 13 next time out. All of this was expertly marshalled by Nick Buoy, current College 1st XV coach who came on for a 25 minute run out and played very impressively with an excellent last ditch tackle on Hurst's huge tight head prop in the dying minutes.

Within 10 minutes of the start of the game Adam Phillips danced through to score to the right of the sticks, and the metaphorical flood gates opened. The OB's pack was so dominant up front both in the scrums (Timmy Walford) and in the lineout's where myself, Rupert and Alex Shaw stole countless ball off our often much taller opposition (hats off to the lifters), it was sometimes hard to play the backs in more. In reflection we should have really put at least three or four more trys on the opposition.

To list each try one by one would take an age and given my love of pomp and ceremony would most likely turned into a mini novel, so a simple list should suffice. Harvey Strudwick 2, Dipo Osho 2, Adam Phillips 2, Tom Howell, Alex Shaw, Tom Hayward 1 each. The final score ended 53 - 7 in the OB's favour, we did however lose the annual boat race afterwards for the second year in succession, and given the number of Exeter University boys we have I must say I was actually pretty disappointed.

Here's to Hove RFC for their generous hosting of the event and a genuinely warm thank you to Hurst for what was actually a very physical match. I hope to see you all at the OB's next home game and thanks so much to all those who braved the arctic winds to cheer both sides on.

Yours as ever, Hugo