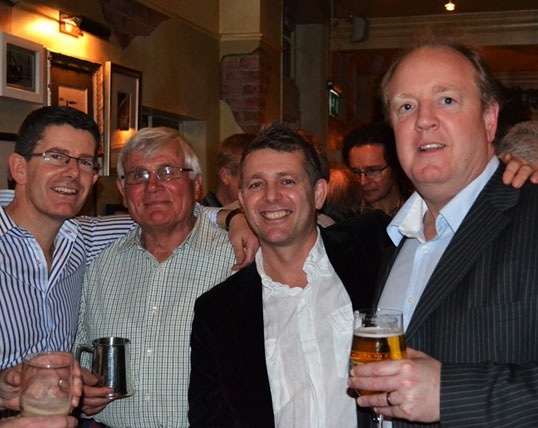 Brighton Drinks at the Pub du Vin was wonderfully attended last week, and a convivial evening was had by all. A large party went on to have curry, which seems to be a developing theme of late! There were so many OBs crowded into the bar, that we didn't quite catch everyone's name, but we did promise to organise another evening soon, so watch this space.

"There was such a good turnout at the Pub Du Vin on Thursday night. It was great fun to meet up with so many old friends; we all had a most enjoyable evening reminiscing on the good days and a few bad ones!! A big thank you to Rebecca and the gang for organising the event. Looking forward to the next one!!"
Bertie Wilkins (H.1975-78)

"Despite arriving at Pub du Vin and not finding a single OB from my school years a great night was very much had. Getting to know new people with a shared background was great fun, Proof if ever there was of the joys of the Old Boys network. I will certainly be joining the OB for the next Brighton drinks and if anyone else under 35 fancies coming as well then all the better!"
Jonny Cornthwaite (S. 1994-99)

"I came along with Richard Brock-Reed (S.83-88) and our train back from London was inevitably delayed so as we walked into a busy Pub du Vin the gathering was in full flow. We were immediately welcomed by the lovely Rebecca Findlay who informed us that everyone in the Pub were in fact OBs, a very healthy turnout and a surprise to me as this was my first OB Drinks. Drinks and good conversation with as many folks as possible made for a very enjoyable evening and new entries in my address book; I will certainly be coming to the next Brighton Drinks."
Leo McKeague (S. 1988-91)