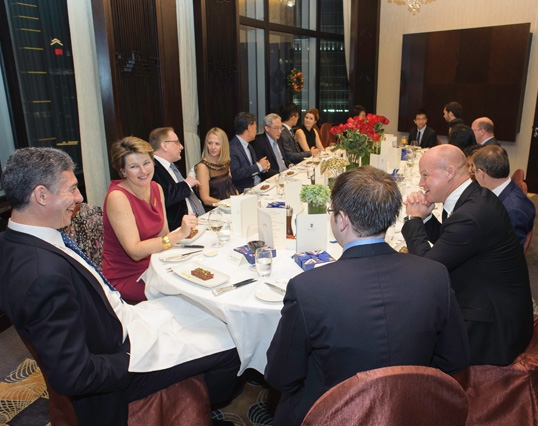 Globe trotting Headmaster Richard Cairns clearly has taken a shine to Hong Kong, Special Administrative Region of the People's Republic of China. No sooner had he hosted an excellent evening at the China Club in late September than he was planning a return visit in December! This came to pass and we convened for dinner in the Peking Room at the American Club in Central.

In true Hong Kong high rise style, The Peking Room is located on the 49th floor. It overlooks the main harbour and so we enjoyed a spectacular view of the Christmas decorations that adorned the buildings along the water's edge opposite us in Tsim Sha Tsui. Also in attendance were Bursar, Paul Westbrook and Director of Philanthropy, Jill Sherratt from the College, Old Brightonians of varying ages (was I really the oldest?!), plus current and former parents of College students. It was very encouraging indeed to see such a good representation of young 'Old' Brightonians.

The Headmaster described (without the use of notes!) the exciting and ambitious development plan to upgrade school facilities, notably construction of a new Arts and Music Wing. He explained how OBs can contribute to this initiative. He also summarised the great progress that the College has made during recent years, explaining that now it was time the school's facilities caught up with the tremendous improvements achieved in academic, arts and sporting results. Sidney Ko (S. 1973-79) responded warmly on behalf of the OBs, in his capacity as Asian representative.

The evening drew to a close with hopes that further events would take place during 2013. We wished the Headmaster and his colleagues bon voyage, as they continued their Asian adventure to other corners of the region before their return to England.