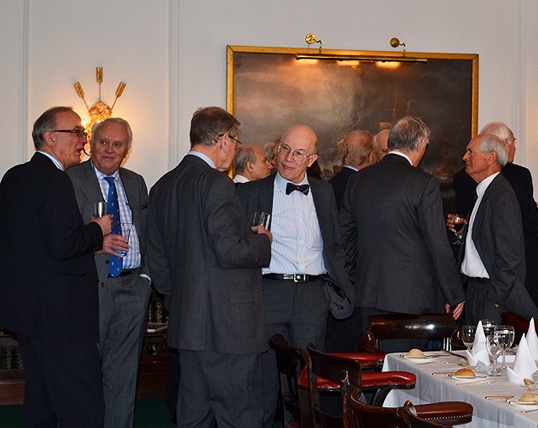 We were fortunate with a glorious spring day, indeed St David's Day, for our 7th Vice-Presidents Luncheon, hosted by Peter Miller (C. 1945-49) at The Army & Navy Club.

Drinks prior to the event were well attended, and the handful of early birds enjoyed watching the march around St James's Square by members of the Naval & Military Club (The In & Out Club) who were celebrating their 150th Anniversary. Led by the Band of the Royal Logistics Corps, they were greeted by Prince Philip, the Duke of Edinburgh, before retiring for lunch inside the club. It was quite a sight to behold, and as Peter Miller noted perhaps we should have charged extra for the spectacle!

Peter had thoughtfully asked Derek Jones (C. 1945-51) to give the grace in welsh in honour of the date. All enjoyed a superb luncheon, and managed to do some homework for the OB office at the same time - annotating a list of Old Brightonians that we have lost contact with. Matt Godfrey, Master of School House brought greetings from the Head Master and news from the College. Matt spoke fondly of retiring Master John Spencer (Master 1978-2012) who as Head of Geography and a fine cricketer has been a stalwart of the College for many years and will be much missed. John noted cheerfully that he would be retiring at the end of 99 terms service. Sir John Chilcot (H/S 1952-57), President of the Old Brightonians, gave a nostalgic and heartfelt speech recalling his schooldays. Our thanks go to Peter Miller (C. 1945-49) for hosting this most enjoyable annual event.