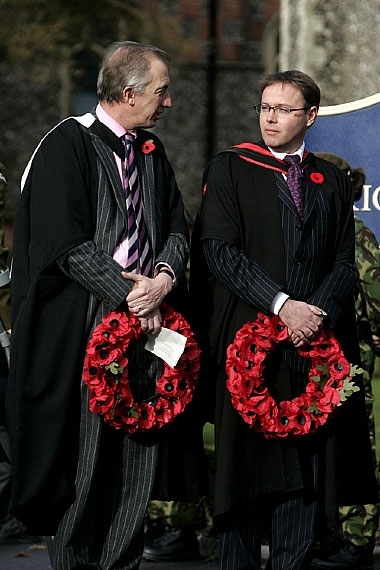 The chapel was full to capacity for Service of Music and Readings for Remembrance Sunday. Parents, pupils, and many Old Brightonians came to listen to the roll call of those who died in World War 2, to observe the Silence and to hear the choir sing the Faure Requiem. The readings, which concentrated on the disabling effects of war, ranged from Wilfred Owen to a soldier engaged in Afghanistan. Any parent who was unable to attend, but would like a copy of the service booklet, should contact the Deputies' PA, Louise Moore.

On Wednesday the college, the Prep and Year 3 of the Pre-Prep gathered in the front quad to observe a silence for the war dead, along with the rest of the country. Wreaths were laid by the three Heads at a "field altar" in the centre of the quad whilst members of the CCF lined the roads. Only the crying of the soaring seagulls broke the Silence between the Last Post and the Reveille on the bright November morning.